>  > > What are the unknown secrets between iron ore and the mining industry of Brazil?

What are the unknown secrets between iron ore and the mining industry of Brazil? 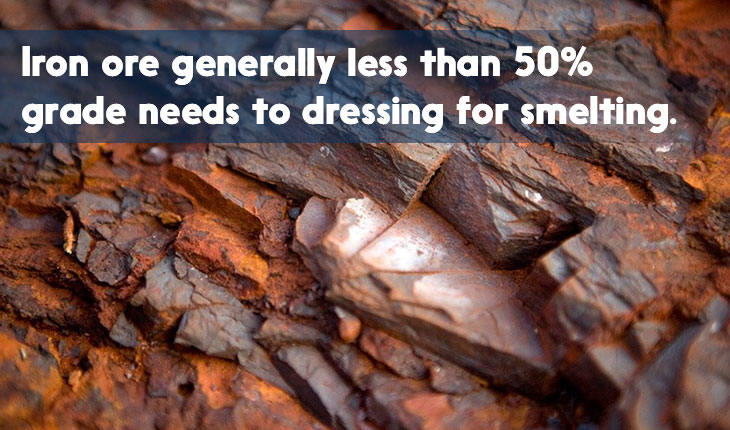 In brief, Iron ore is the ore containing iron or iron compounds. More than 300 kinds of iron-containing minerals have been found in nature, usually, there are three common classification methods in the industry:

The first classification way is according to its chemical composition, that is, the different price points and oxidizing properties of iron elements, and the iron ore can be divided into magnetite, hematite, limonite, and siderite, and these four types of ore are also full of great industrial value under current technical conditions.

The second classification type is according to pH of the ore, which can be divided into the acidic ore and alkaline ore.

In addition, iron ore can be divided into lump ore, fine ore and pellets depending on the diameter.

The factors that affect the use-value of iron ore are mainly including the iron content of the ore, the chemical composition of the gangue, the physical properties of the ore, the pyrometallurgical properties of the ore, and the selectivity of the ore. The grade of iron ore refers to the mass fraction of iron, that’s to say, the amount of iron, which is an essential indicator for determining whether ore can be directly smelted. Iron ore generally less than 50% grade needs to dressing for smelting.

As we all know Iron ore has abundant reserves in nature and is widely distributed in the world. Global iron ore reserves are mainly concentrated in Australia, Brazil, Russia, and China, and the sum of the reserves of the four countries account for nearly 70% of the world’s total reserves.

The usage of iron ore

The standard for iron ore applied in the mining industry like Hongxing Machinery refers to the average iron content which is generally 25% above. The iron ore is an important raw material for steel enterprises, what’s more, the crushers in Hongxing Machinery can be most suitable for crushing the iron ore, especially the HYDRAULIC cone crushers, and the natural iron ore will be picked out the iron by processes like the crushing, grinding, magnetic separation, flotation, and re-election.

Iron ore is mainly used in the iron and steel industry to smelt pig iron with different carbon content (the carbon content is generally above 2%) and steel (the carbon content is generally below 2%). According to the usage, pig iron is usually divided into the steelmaking pig iron, foundry pig iron, and the alloy pig iron. However, steel can be divided into carbon steel and alloy steel according to the composition elements. Alloy steel is a steel-based on carbon steel that intentionally adds an appropriate amount of one or more elements to improve or obtain certain properties. There are many types of elements added to steel, mainly chromium, manganese, vanadium, titanium, Nickel, molybdenum, silicon.

Brazil’s iron ore resources are very rich, and its main producing area is in the state of Minas Gerais. Among them, Itabiira has the most abundant iron reserves and is known as the “Tieshan Mountain”. Itabira open-pit iron ore is one of the world’s largest reserves of high-grade iron ore. Vale has almost monopolized Brazil’s iron ore production market. Founded in 1942, Vale is the world’s largest iron ore production and export company, the world’s second-largest mining company and the largest mining industry in the Americas. the company. Vale has a 50% stake in MBR and Samitri-Samarku, which have actually controlled the two companies, and most of the iron ore in Brazil is controlled by Vale. At present, the production of iron ore in Vale accounts for about 80% of Brazil’s total national production.

Brazil is also rich in natural resources, and 29 kinds of mineral reserves such as antimony, manganese, titanium, bauxite, lead, tin, iron and uranium are among the highest in the world. The reserves of antimony ore have been proven to be 4.559 million tons, and the output accounts for more than 90% of the world’s total output. The proven iron ore reserves are 33.3 billion tons, accounting for 9.8% of the world, ranking fifth in the world, and its output ranks second in the world. The proven reserves of oil are 15.3 billion barrels, ranking 15th in the world and second in South America!

And its iron ore products are of higher grade, with the lowest aluminum content and other impurities, and the world’s largest iron ore producer, CVRD, comes from Brazil. The largest international market for Brazilian iron ore exports is China and has long been the second-largest country in China’s iron ore imports.

Recently, due to the sharp drop in Brazilian iron ore production, why is this? The Feijo iron ore dam in Brazil was damaged by mines at the end of January. The Vale has closed more than 90 million tons of annual production capacity. The export volume of iron ore exported from Brazil has dropped by 30%-40%, resulting in international iron ore. Prices have risen sharply. We must know that 20% of China’s iron ore is imported from Brazilian iron ore. Therefore, the iron ore in Brazil has plummeted, and China’s iron ore imports have been in crisis!

From the perspective of supply, a data shows that weekly shipments of Australia and Pakistan have fallen to 12.229 million tons, a drop of 47.6% compared with 23.317 million tons in the same period last year. Such a huge contraction has brought great confidence to the market. At the same time, there is not a relatively stable output increase in the global mine supply to replace the reduction of Cuba, resulting in a continuous contraction of iron ore supply, the news of the more exciting iron ore period spot linkage.